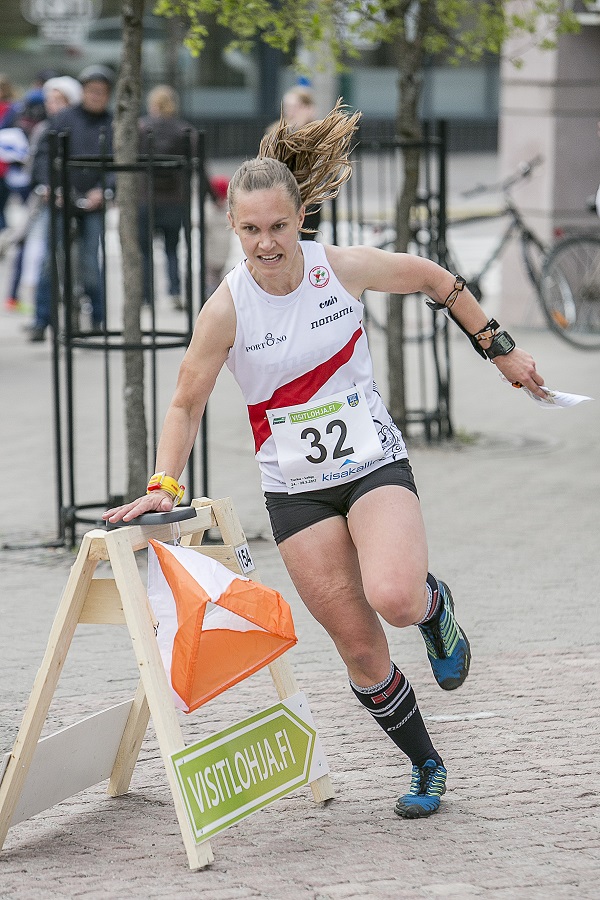 This year's World Cup started last week in Finland, with sprint relay, sprint, middle and long distance chasing start. In the sprint relay I ran the 1st leg for Norway 2, and ran quite well the first part of the race except of 1 routechoice, but lost quite many seconds on the last part, and changed over in the 12th spot 39s behind. In the end the team got DSQ due to a wrong control on the 3rd leg. In the sprint the day after, I ran a very good sprint qualification and got a 10th place there. But in the sprint final, I struggled too much and took two bad routechoices, and ended on a disappointing 21th position. In the middle distance Saturday, I did a stable technical performance, but felt I had to slow down a bit to be able to find the controls, and I did not execute the longer legs well enough loosing time on zigzaging. So a bit rusty in nordic terrain, I was too slow and ended as 32nd. Ahead of the chasing start I was 25th, 5:34min behind. I went out in a big group, but my legs were heavy and I had no chance. Ended as 26th, with 32nd best time.

I went to Finland on Monday, and meet with the rest of the norwegian sprint relay runners in Helsinki. On Tuesday we did a sprint training in Turku, and took a look into the sprint relay terrain from the roads closest to the embargoed area. Wednesday the World Cup started with sprint relay. I ran 1st leg, and I was quite nervous. The start went up narrow stairs, and since I ran for the 2nd team, I started in the 5th lane. Therefore, it was difficult even to stay on my feet the first 15sec, due to several runners trying to push their way forward by pushing others aside when there was no space at all. I survived it, and tried to run hard when the stairs ended. I therefore almost had closed the gap up to the first teams at control 1. To control 2 I was the only one going all to the right, but this was a good choice and I was up there with the best teams. 3rd and 4th control went well, but to the 5th I was biased by the success of going through the 5th control to control 2, so I ran the same way back. I lost around 10 seconds on this routechoice, and fell down in the field. I ran well to the arena passage, and catched up some small seconds, passing at an 11th position 12 sec behind. On the 2nd loop, I started to be tired, and additionally I was the only one in my group having my forking. At the same time I thought to complicated, and decided to run the routechoice in which I did not risk to meet the runners ahead of me running towards the next control. This made me take several wrong routechoices, and 3 controls after the arena passage I had lost 16s to the lead, and thereby I was 28s behind. The last part was ok, but I did one small mistake running past an entrance and having to go back again. The run-in was long, and I saw the others fare ahead of me. I could send out Øystein Kvaal Østerbø 39s behind in a 12th position. Øystein ran well the first part of the course, but lost quite some time the second part, and he sent Ulf Forseth Indgaard out about 90s behind. Ulf ran well for most of his race, but punshed the wrong control in the park and we therefore got disqualified. Anine Ahlsand ran well on the last leg without knowing we were disqualifed, almost following the pace of Ida Bjørgul on team 1. The 1st team got a 6th place in the nation ranking about 2.5 min behind the winning team. 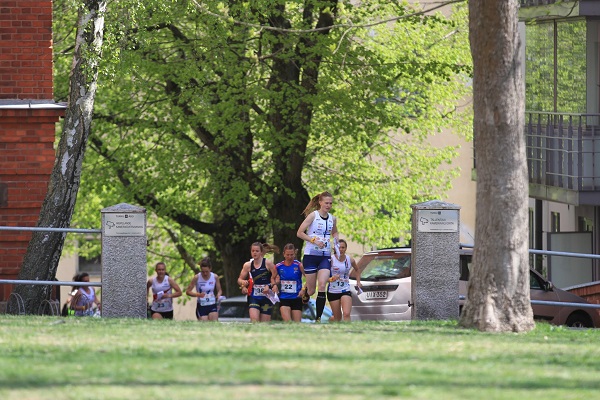 Out of control 1 in the sprint relay - photo: Pekka Kinnala

The day after the sprint relay, the individual World Cup started with sprint qualification and sprint final in Lohja. I did a very good technical performance in the sprint qualification and ended up 10th in the strong startfield, only 24s behind the winners. In the final, I started out poorly having the map 180 degrees wrong, realizing only shortly before the start control, and I had to slow down to turn the map and deciding where to run to the 1st control. I lost as much as 7s to the 1st control. I also was confused about all the construction work in the area, and did not really find into the map before approaching the 3rd control. But I was a little stressed and struggled to find a good flow, and out of control 5 I was behind in the map reading, and ran an extra round around the little house instead of just continuing through the control. I run ok for many control after this, but run too slow, and lose time continuously to the best. To control 11, I pick the wrong routechoice loosing almost 10s, and the same happends to control 15. Here I lose about 10 s on the routechoice and 5s on running past the control and having to turn back. In the last part of the course I am tired, and I forget to think about that it is faster to run through the controls with touch-free, and lose seconds on control 20 and 21. In the end I was disappointed with my performance, I did not find the flow and I ran too slow to really fight for the good positions. Lucky for me, the sprint qualfication time was important for the chasing-start. 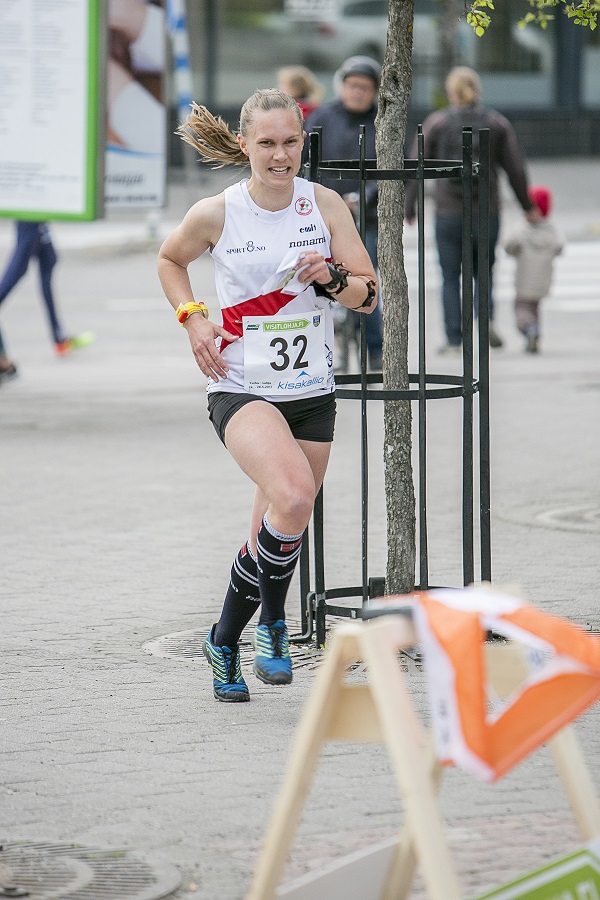 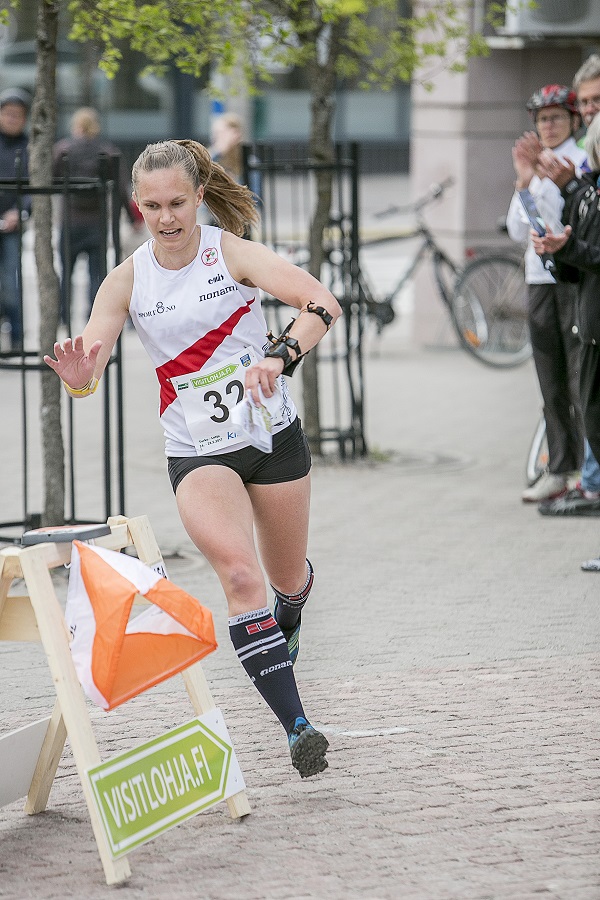 After one day of rest and a short training in the forest Friday, the World Cup Tour continued with middle distance on Saturday. I started out well, but hesitated a little half way to control 1, but could catch myself and ran well up to the hill of the control. Inside the control circle I knew that the control was supposed to be in the south east end of the small hill, but when I was there I could not see the control, only some men garding the control. I therefore wrongly thought I was on the wrong hill and went further west in order to find the "correct hill". Realized quite soon that the hill I already had found was the correct one and turned back. I found the control, which was just really standing low and very close to the hill. Irritated I refocused and ran ok to the 2nd control, and also to control 3. To control 4 I decided to make it easier for myself by running on the path, but I took of the path to early and got a little stuck in some green and got the steeper climb to the control than if I had gone straight. Lost 40s to best split. To control 5 i struggled out of the control and hesitated a little bit in the slope, but found the control well in the end, loosing another 30s to the best split. Control 6 went well, and to control 7 I again hesitated a little into the control. I was really careful on these more technical short legs, and lost time continuously. To control 9 my plan was good but the execution poor. I zigzaged way too much, and lost a lot of time (50s to best split). Run ok to through 10th-12th. But my routechoice to the 13th was poor, the white hill had a lot worse runability than I thought, and I loose 37s to the best split! In end it was a stable technical performance, without any big mistakes, but my technical level in nordic terrain was rusty and the execution of many legs was just not good enough. 32nd place in the end.

After the sprint and the middle distance I was 25th in the overall tour, and had a lot of runners within only some seconds. I therefore went out into the chasing-start on Sunday in a big group of runners. The speed was high from the start, and I managed to follow and close the gap to some of the runners ahead in the beginning. But I was tired and I hoped that the speed would decrease soon, but it didn't. Towards control 2 I fell backwards in the group and towards the 3rd I had to let go. This was not my plan, but my body was too tired and did not want to run faster. In the butterfly I ran ok, but made one mistake inside the control circle at my control 8 (the west-most loop). Out of the butterfly I was together with a runner from Finland, and towards control 11 we came together with a swedish and a russian runner. At control 11 there was a map exchange. To control 12 I chose to run around on the road, and to control 13 I did not understand the terrain into the control, and hesitated a lot, and thereby lost contact with the russian and finish runner. Also lost the back of the swedish runner on my routechoice to control 14, and was alone at the arena passage, even though I saw the swedish back fare ahead of me. On the last loop I was really tired, and the steep slopes were tough. Technically, I ran ok, and catched up the russian and finish girls again, but they were faster and ran away from me again up the slope to control 19. From there on I was alone. Ended the race in 26th position, disappointed about my physical shape. I had hoped to be able to fight even though it was the 5th race in 5days, but by body wanted otherwise and my puls also shows that I was not able to push, never being close to my normal puls not even at the start of the race on the roads. 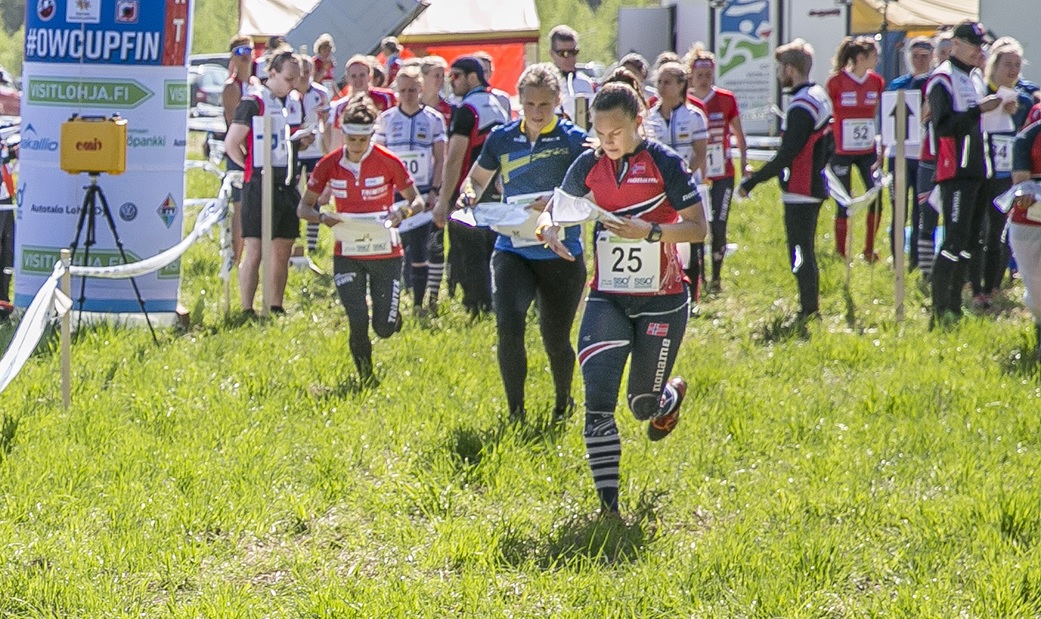 Starting out on the Long Distance - Photo: Hannu Kaasalainen

It was a tough week, with the highlight being the sprint qualification race in which I did a good performance. The sprint relay and final were stable but not as good as I aim for, and in the middle distance kind of the same feeling. I have not been training anything in nordic terrain this winter, and to be able to perform on international level this is necessary. Physically I am still not where I want to be, lacking a little bit capacity and speed, but also the base in order to perform over several days. After this week, I am currently on the 26th positon in the overall World Cup, and I could get some World Ranking points. Now I am heading back to Switzerland for some few days, before I go back to Norway on Friday for the Norwegian Champs. in sprint and sprint relay next weekend. Before that the selections of the WOC-forest disiplins will be selected, I know I was just behind in the selection races in Estonia, behing 3rd in long and 4th in middle, and that my chances are small to get to run the long distance which I really want to, but I will have to wait and hear what the coaches decides. In the sprint distances I am probably better into the fight, and there is still some selection races left. The sprint distances will be selected next week after the norwegian champs.