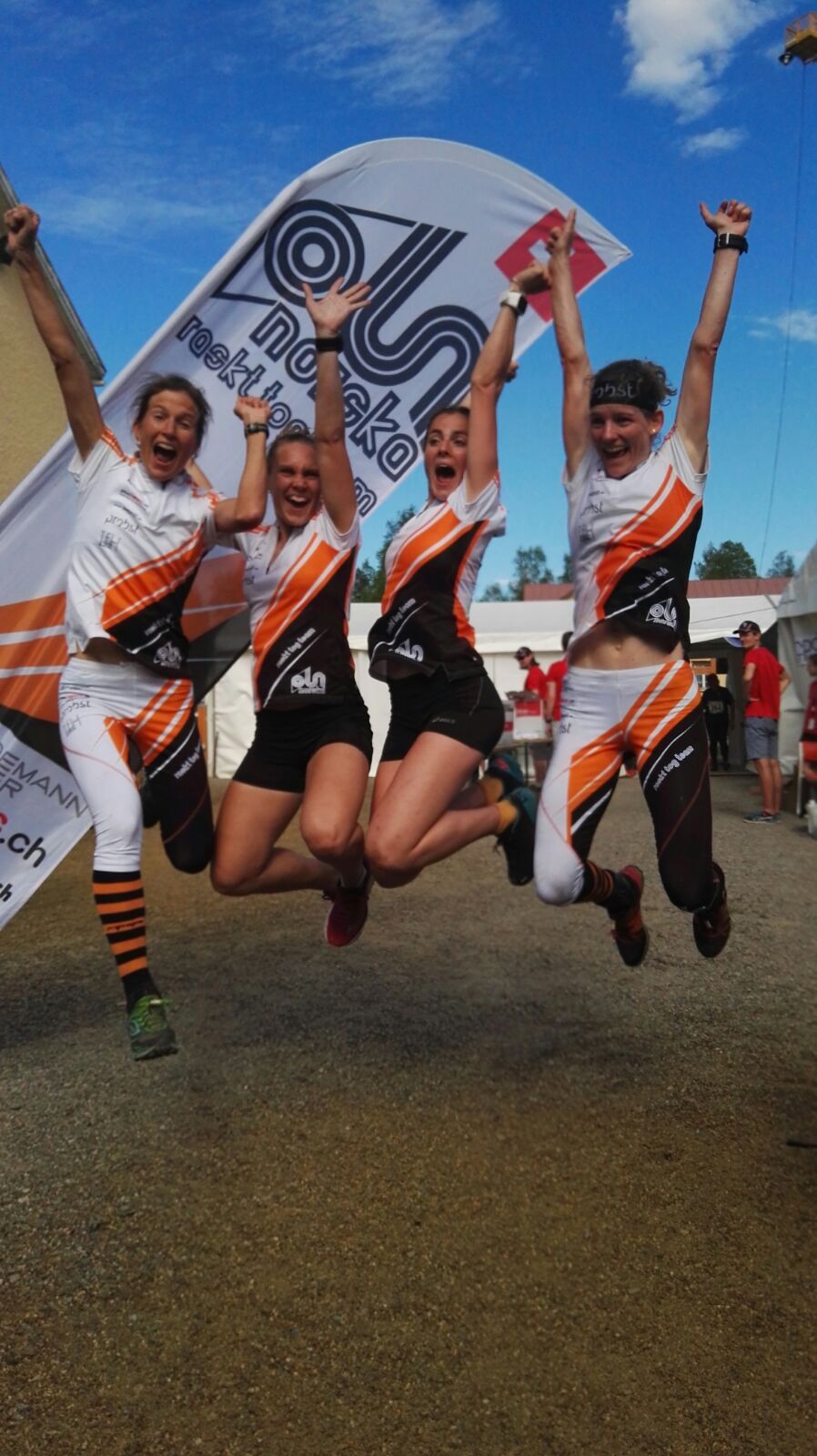 After working together towards a common goal during the whole winter, it is just fantastic to succeed! We knew that our team, with Sarina Jenzer (1st), me (2nd), Simone Niggli (3rd) and Sabine Hauswirth (4th), was good enough to fight for the medals at the Venla relay, but to actually make it cannot be expected, and really a dream coming true! Our tactic was to go out there and focus on our technical performances, and have fun - and so we did! After four good technical performances we could run in together as 2nd best team! Our 2nd team also ran well, and captured a good 149th place. In the Jukola Relay our boys also delivered solid performances through the whole night, and could run in as 20th with the 1st team and as 200th with the 2nd team. The 2nd place in Venla and the 20th place in Jukola were the best positions of a non-Scandinavian club ever! Thank you to all the runners, the rest of the club, the sponsors, the leaders, and everyone cheering at the arena or via the live TV at home!

I have been running for OL norska, in Switzerland, since I moved here in 2010, and before last season (end 2015) we started an elite team "raskt tog team" together with several sponsors for all the elite runners of the club. This autumn/winter we decided to make Jukola/Venla Relay our main common goal for 2017, and we have therefore had several training camps and training days together to prepare for the relays, and other team events. I went to Finland and Koli (where we lived) at Thursday, just after the WOC precamp, and meet with the rest of the team there. On Friday we went to an official training close to the arena, and took a look at the arena as well. Sabine and our team leader Bruno Haldemann were also invited to an interview with YLE (the finish TV station covering the relays). In the evening we talked and discussed about the terrain, and how we wanted to tackle it. Saturday morning, many of the runners went to Koli national park to run up to the highest peak Ukko-Koli (347m above sea level) as a morning jog, before heading down to the arena. 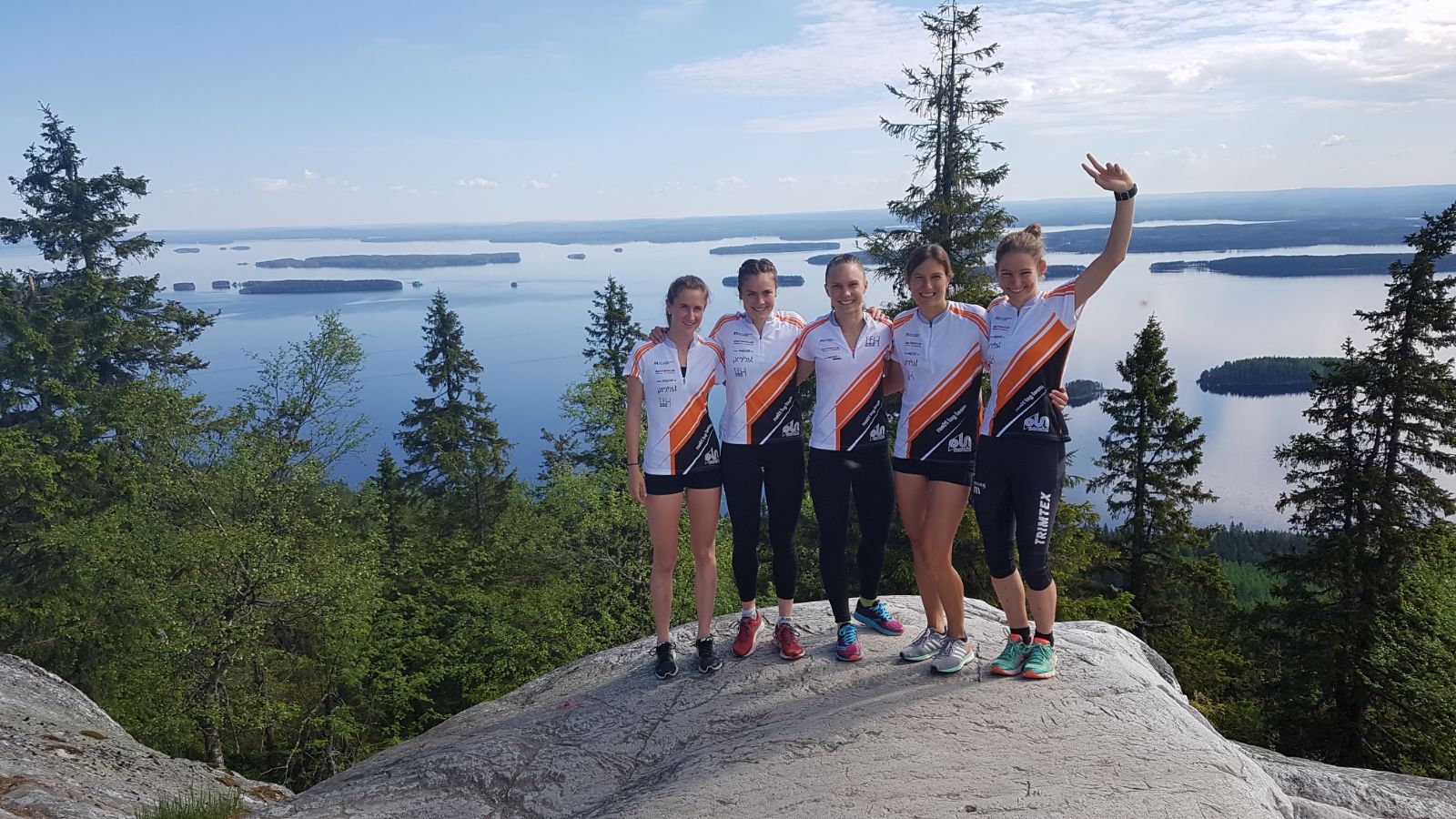 At the arena we could take a look on the last controls, and I think all of us felt the Venla nerves definitely coming, as well as the tingling feeling in the body with the approaching relay. Our two first leg runners, Sarina Jenzer and Martina Ruch, were ready, and the rest of us found a spot beside the masstart to see and cheer for the 1200 teams! 14:00 the start signals was given and the girls headed out. I went together with Anja Probst in the 2nd team to warm-up, and after a little bit of searching for the start entrance, I was ready in the change-over zone. Out there I heard that a lot of top teams were doing mistakes, but that Sarina did a good job. Some nervous waiting, and then she came sending me out in the 9th position 2:20min behind Altfa Östa who was leading after 1 leg.

I had one team just behind me while running out, but this team was gone before the start point. At the start point I did see some runners fare ahead of me, but in the forest they were gone. So I just did my own orienteering. Decided to use the big path and then run down the reentrance to the 1st control, and at the 2nd control I had already climbed 7 positions since change-over and was 2nd in the relay. I did not know this of course, I had not seen anyone else, and to the 3rd and 4th control I entered a dense and difficult area, which was heavily forked. Both my forking controls were inside the dense light green vegetation, and with a lot of small details. I slowed down and orienteered really carefully. I probably lost some time here, by running slower, but I avoided mistakes, and I was still 2nd at the 5th control. To the 6th control, I was not tough enough with my compass, and lost some time, and in addition I searched my control too early. Here I lose about 1.5min. To the 7th I saw some runners in front of me coming from different directions, and thought that they probably had caught me from behind. The 7th was again forked, so I focused on myself and picked my control, the same to the 8th were I also crossed some other controls and runners. The 9th were also forked, and I picked it well. The 10th was unforked, and here there started to be a lot of runners from the first leg in the forest. I continued to pick my forking to control 11, and towards control 12 I had Paimion Rasti just ahead of me. I increased my speed to catch up with her, and overtook her into the 13th control. From here there was only the last control left, so I tried to push hard to to keep Paimion behind med. The run in was really long, but I got a lot of cheering, and I managed to get some meters to the runner from Paimion Rasti. I changed over to Simone in 2nd position, 4:05 min behind Alfta Östa. 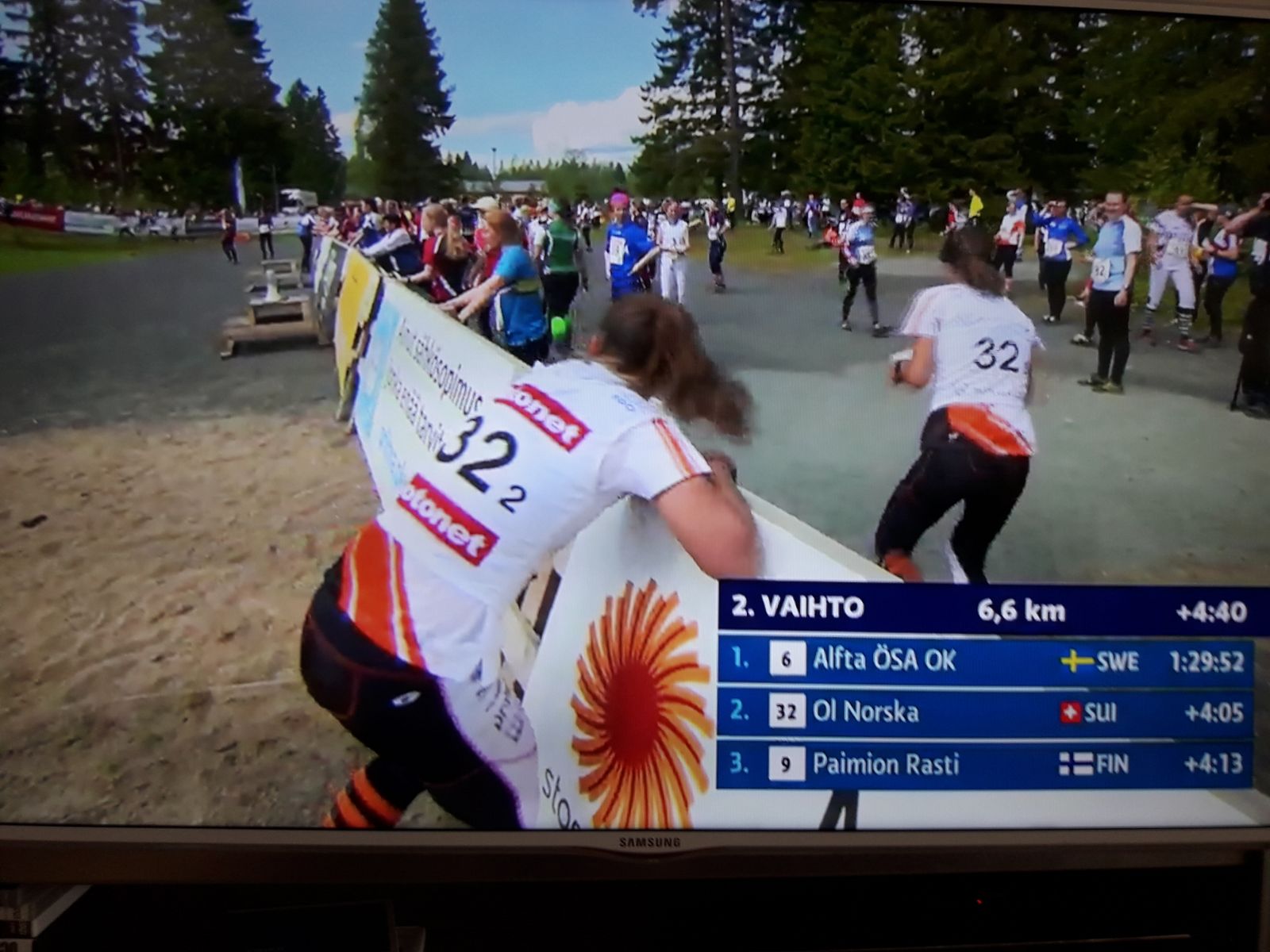 I had done my job well, and now I could only join the rest of the club, waiting and watching the two last girls run their legs. Simone did a flying start, and she catched Alfta Östa after half of here race. The 2nd half she could even get away, and changed over to Sabine with a 1minute lead. We were definitely in the medal and even the gold fight. Sabine started safe, but made a small mistake in a green area, so Natalia Gemperle for Alfta Östa catched up with her at the first TV control. They ran together on the long leg, but they had different forkings, and Sabine had the longer one. Sabine kept on fighting alone, but the gap of Alfta Östa was not possible to close again. From behind Tove Alexandersson was fighting hard for Store Tuna, and she came close towards the end. But Sabine did a very strong finish, picking her controls well, and the gap was never smaller than 30 seconds. Therefore Sarina, Simone and I, could run in together with Sabine the last meters! 2nd best in the world’s biggest relay together with my club and daily training mates – wow! This performance had not been possible without the rest of the "raskt tog team" runners and crew, the rest of the club OL norska, the sponsors, and all the good trainings and preparations which we did together! Thank you all! Too succeed together, is the nicest way to succeed! Our 2nd team also did strong performances, and reached the 149th place. 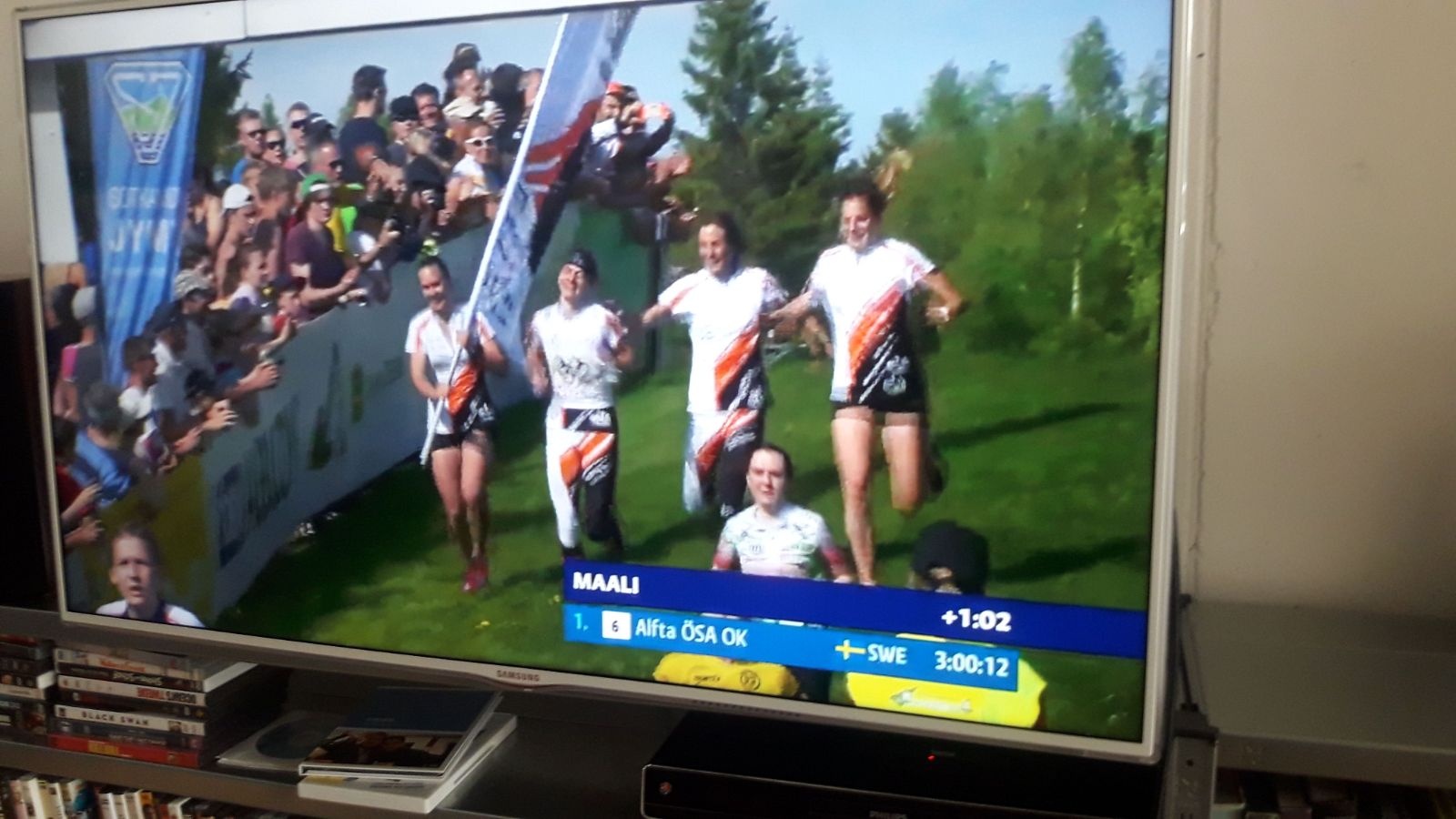 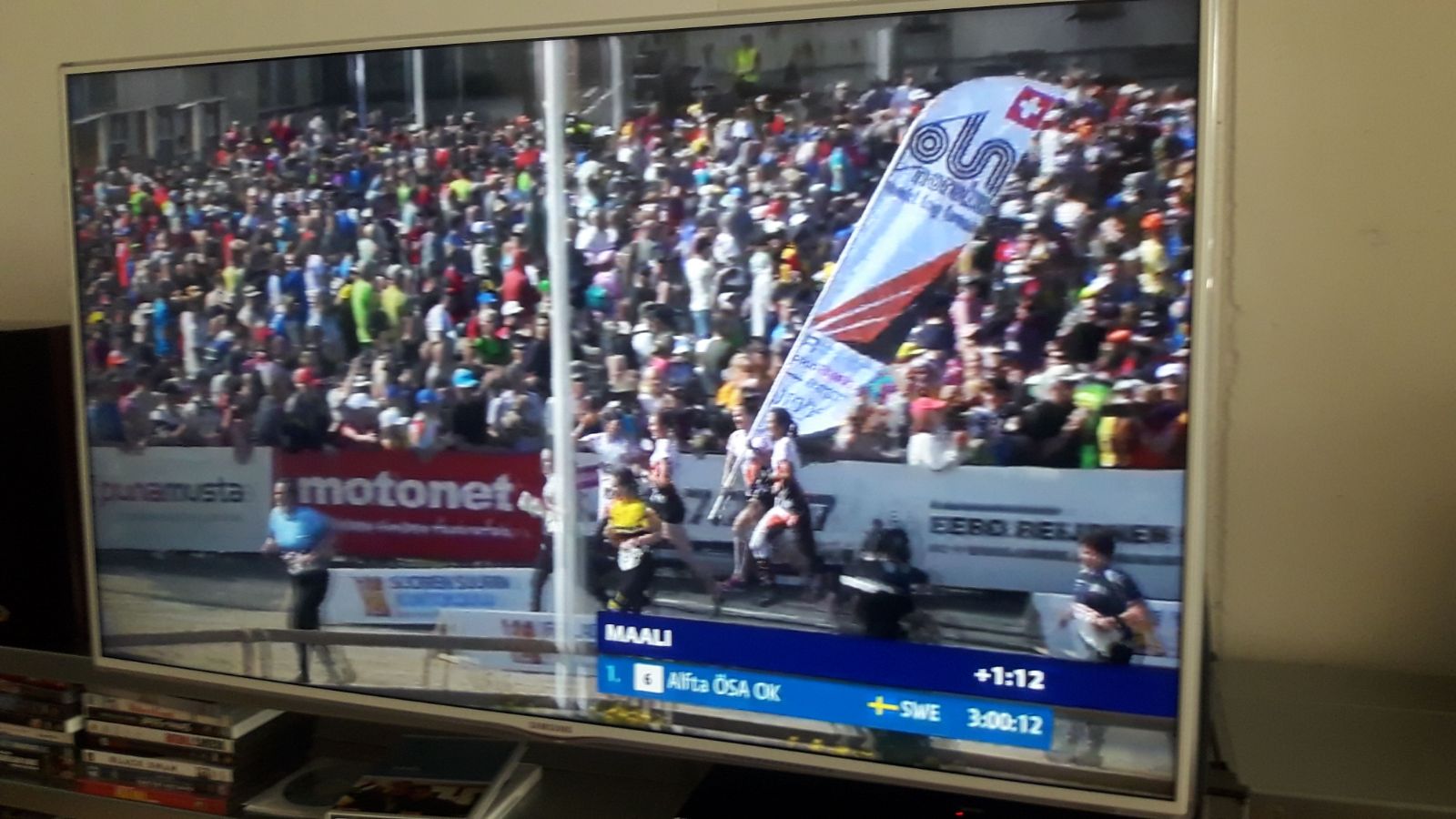 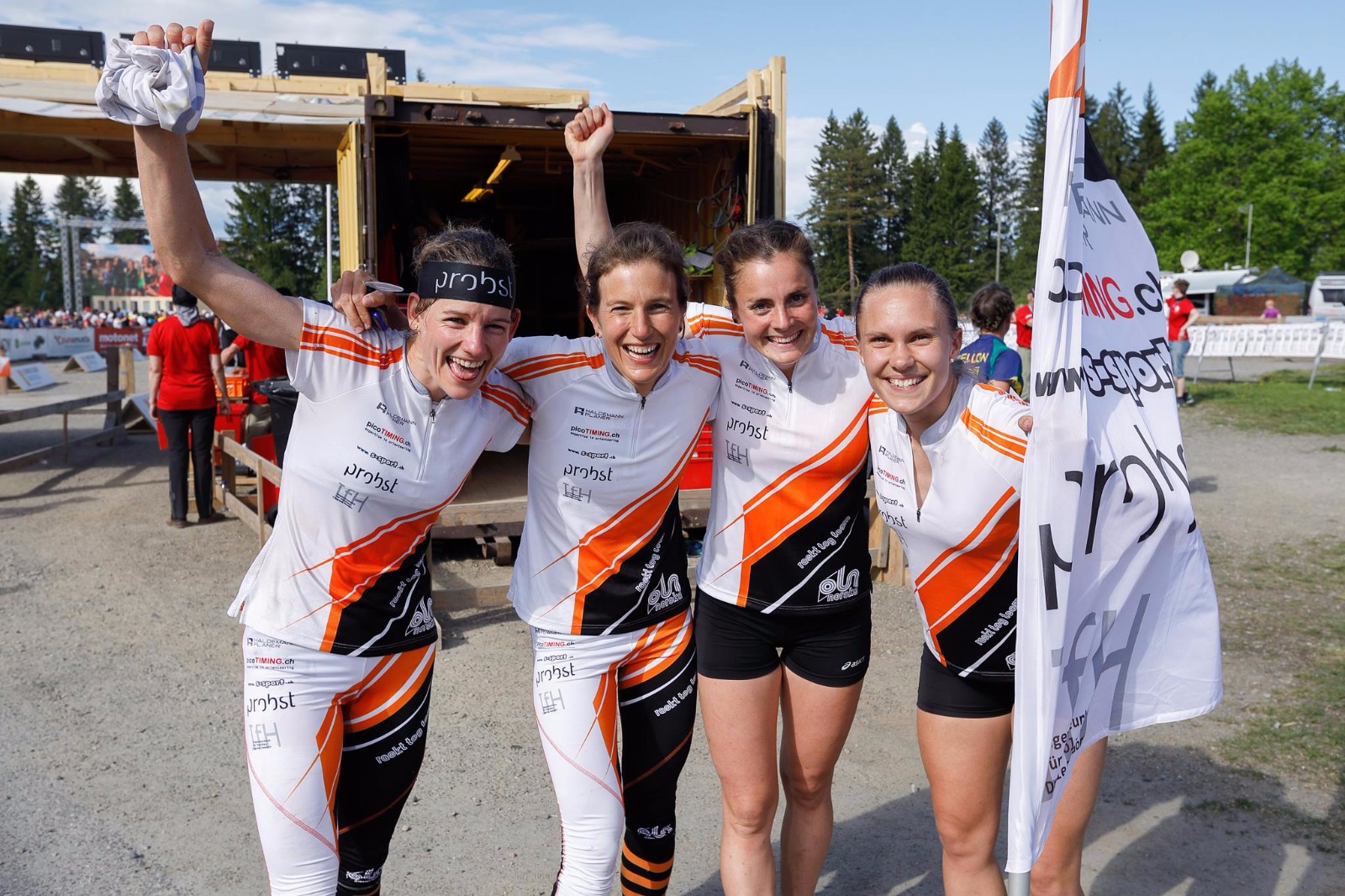 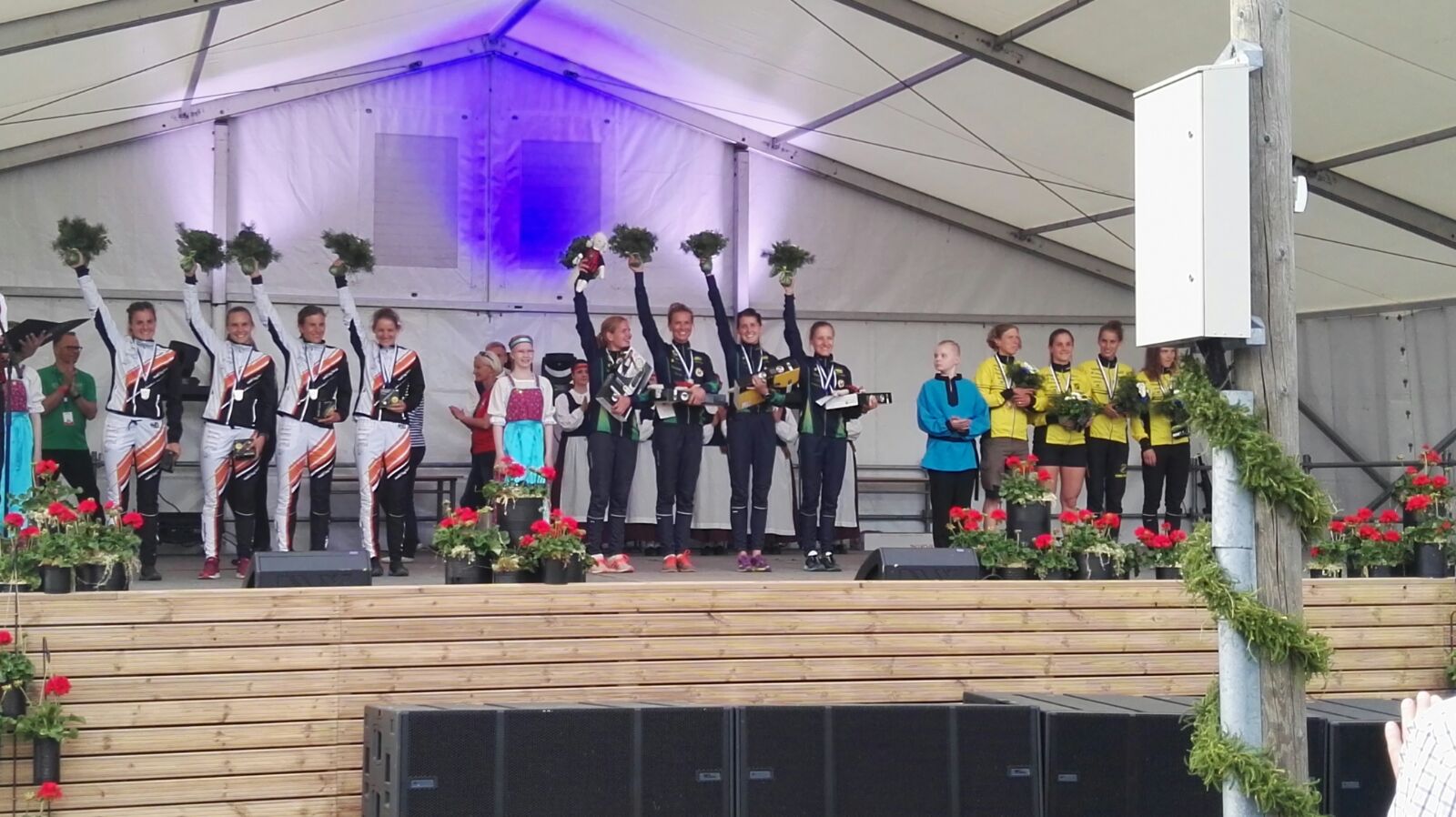 In the evening and night the boys ran the Jukola Relay. They delivered strong performances through the whole night and morning, and even managed to run in as 20th team catching the last prize positon! The 2nd team fought well, and could secure a 200th place! 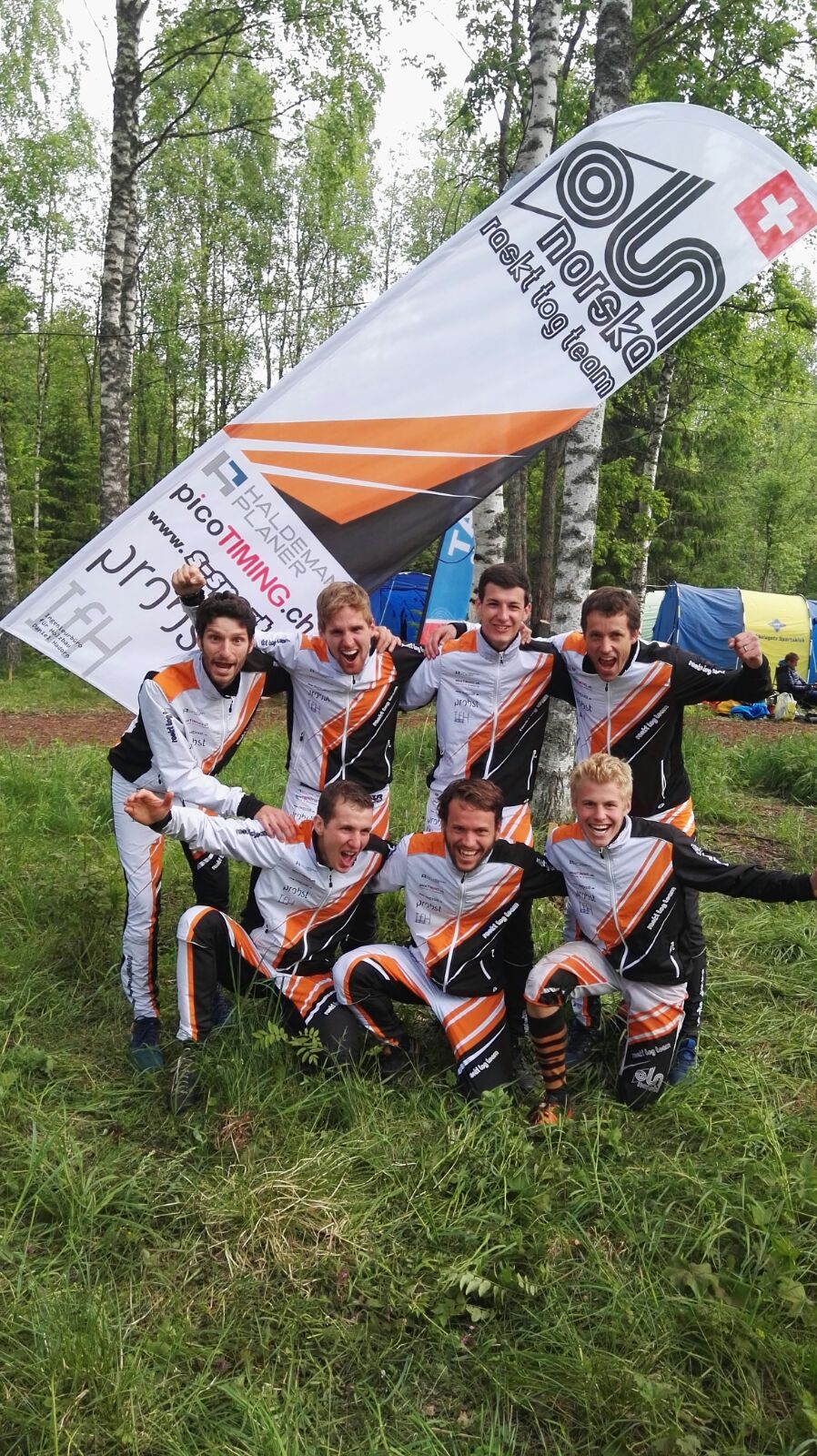