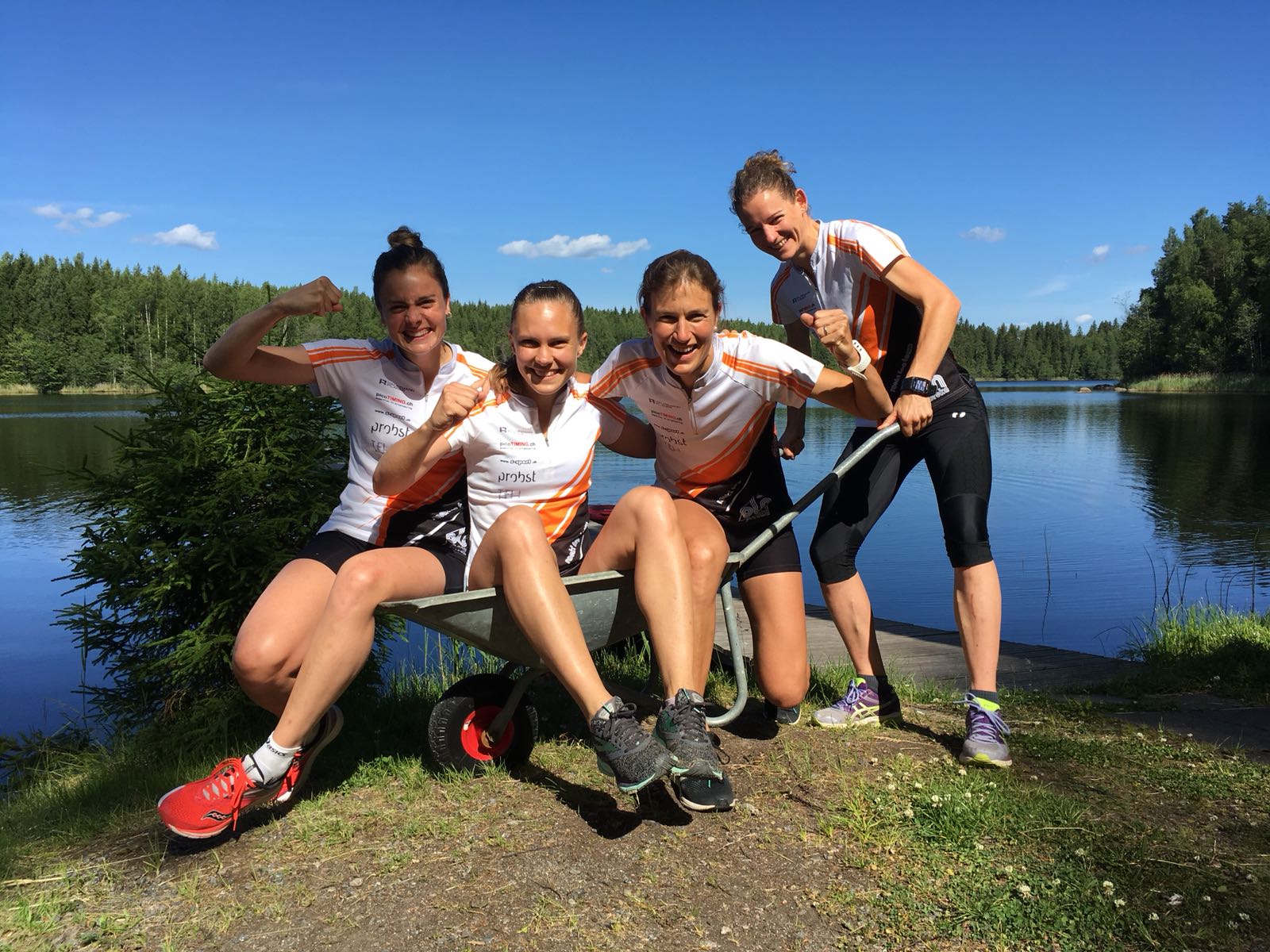 The Venla Relay is always a highlight, and so it was also this year. We had the exact same team as last year with Sarina Jenzer at 1st, me at 2nd, Simone Niggli at 3rd and Sabine Hauswirth at the 4th. In the flat terrain with ice age depression the relay became a tight competition. Sarina started well, and changed over to me in 11th position. I ran safely through my leg, except one mistake towards the end and could send out Simone as 6th. Simone ran well, and brought us into the lead. Sabine ran a safe last leg, but did not have the power to follow the fastest girls. She, however, secured our goal of a top 6 position, by running us in to the 6th position! Fun that we could run with the leading teams through out the whole relay! Thank you to everyone in the raskt tog team and OL norska for the whole road to Venla!

The road to Venla (and Jukola for the guys) started already this winter with several team trainings with relay focus. We travelled to Finland on Wednesday and Thursday, and could get some technical trainings in the special negative terrain. From all of the days in Finland we created a Jukola-daily video (see them all here: LINK), and every day we could go swimming in the lake, sitting in the hot-pot, or in the sauna. Friday we went to set up our tent, and team spot in the arena, and we could look through the sport shops. In the evening the driving plan og relay tactics were discussed a last time, and then sleep one more night before the fun could begin. 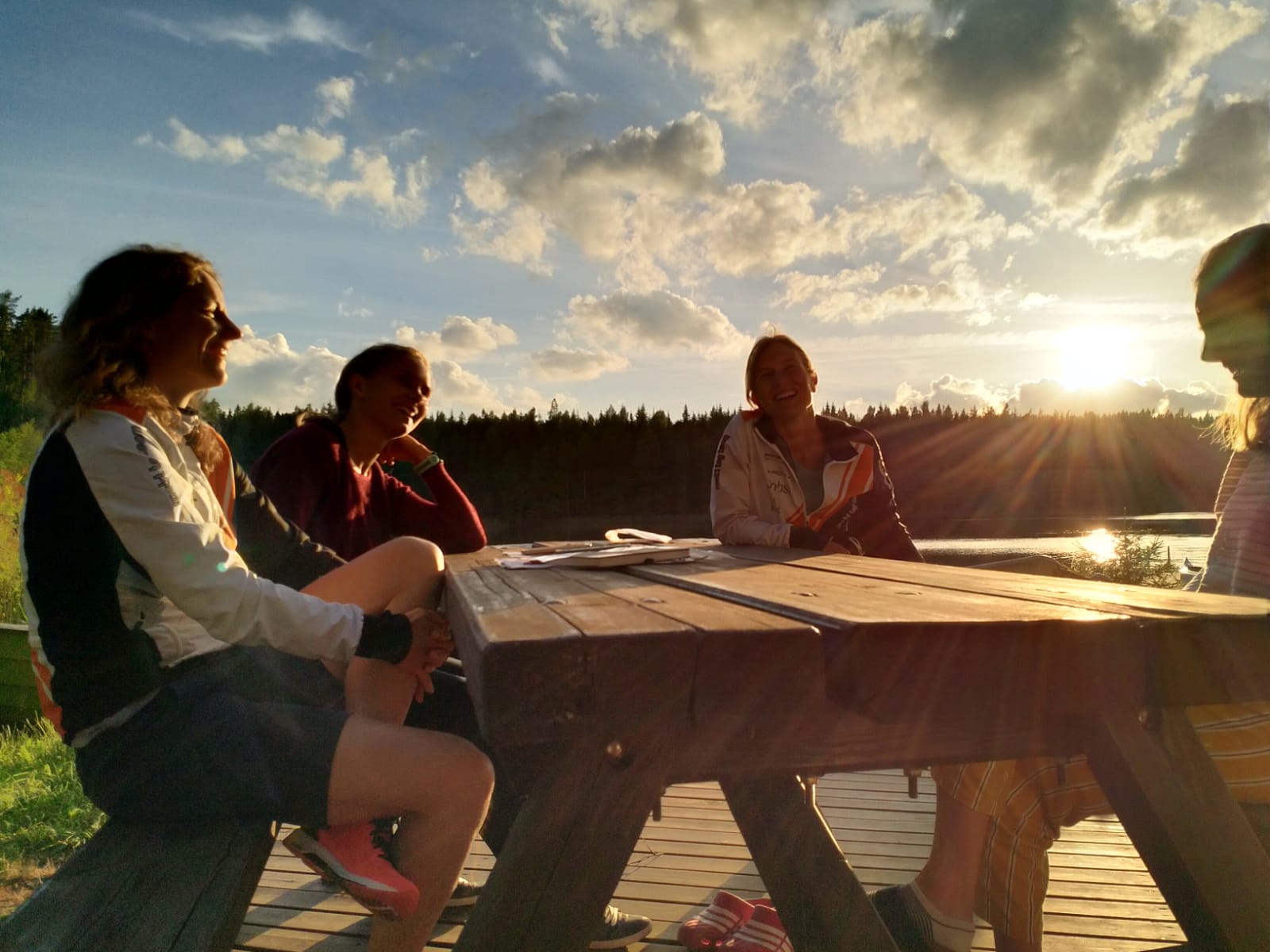 It was hot and sandy in the arena, and the hours before the relay we stayed in the shadow by the team tent. Sarina and Valerie Aebischer ran the first leg for our two Venla teams. Sarina ran the first leg just as planned, and stayed with the leading teams all through her leg. Towards the finish she lost some seconds due to a longer forking, but sent me out in the front of a bigger group as 11th. I ran out towards the startpoint with some other teams in front of me, but when they went straight for the yellow and green area, I decided to stick to my plan and take the path around. This was a good idea, and I could run towards the first control alone, and by punching it Alfta ÖSA crossed infront of me. She disappeared in another direction and I was again alone. Towards the 3rd I was quite alone on my left routechoice, but saw some people into the control. To the 4th I ran along the vegitation boarder, and my plan was to go through the white forest towards the control. But when I got there, it was so much fallen threes, and I saw that there was a depression leading to my control if I stayed in the yellow in stead, and so I did. I thereby had my control without problems just behind some other teams. At the TV control at control 5 I was 1min behind the lead. Towards the 6th I ran my own route, leading my group, but they did not really follow me. I ran via the drinking point, and then via the passes between the bigger depressions (as Ueli Werren said the day before: taking the pass-ride). I catched up with a group without knowing this was the lead, and punch the 6th control 5s behind the first team. To the 7th I went right together with one more girl, and was first there. Towards the 8th I went straight to the path, but then wanted to go a little right to find the white area through the depression, but went in a little late after another girl, but felt I had to go a bit further right to not get into the green depression to the left. But I was too fare right, and landed in the big depression. I did not know where I was, but decided to just continue to the next path and relocate there. After running some meters to the right on that path I realized that I needed to turn, and found back on track towards my control. I lost 2minutes to the fastest girl in the gps-tracking and 1min to the lead. The last part of the race was mostly running and I ran as fast as I could, and avoided any mistakes. Only out of the last control I totally lost my direction, but did not run before I had got my map, compass and brain straight. I changed over to Simone 1minute behind the lead on a 6th position. 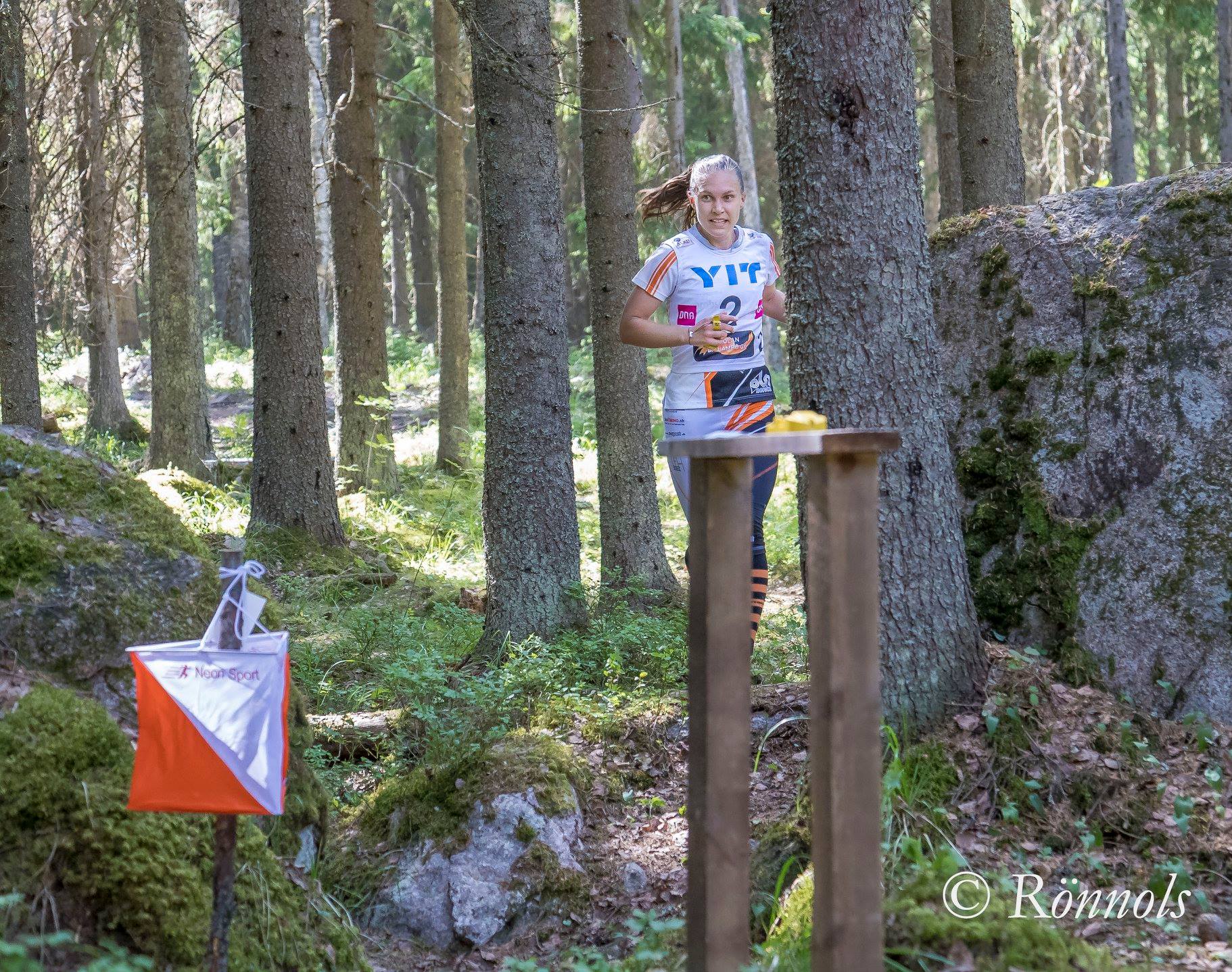 Simone could thereby go out hunting the other teams, and she did well. She catched up, and overtook the lead, and ran in the lead for half of her leg. She could change over to Sabine with a small gap down to Pohjantähti. Sabine ran safely, and individual, avoiding mistakes. But from behind Tove Aleksandersson ran fast, and some other teams also, and they catched up with Sabine and Pohjantähti. Sabine did not manage to follow Toves speed, but kept orienteering well. Towards the end some more fast teams catched up from behind, and we did not have a chance for the medals anymore. But Sabine fought what she had and secured a 6th position, which also was our goal. With four stable performances and goal achieved we were satisfied! To get the opportunity to run among the leading teams in Venla is just great, and it was fun as always! Thank you girls, staff and the whole raskt tog team, as well as OL norska - it is great to be part of this team! 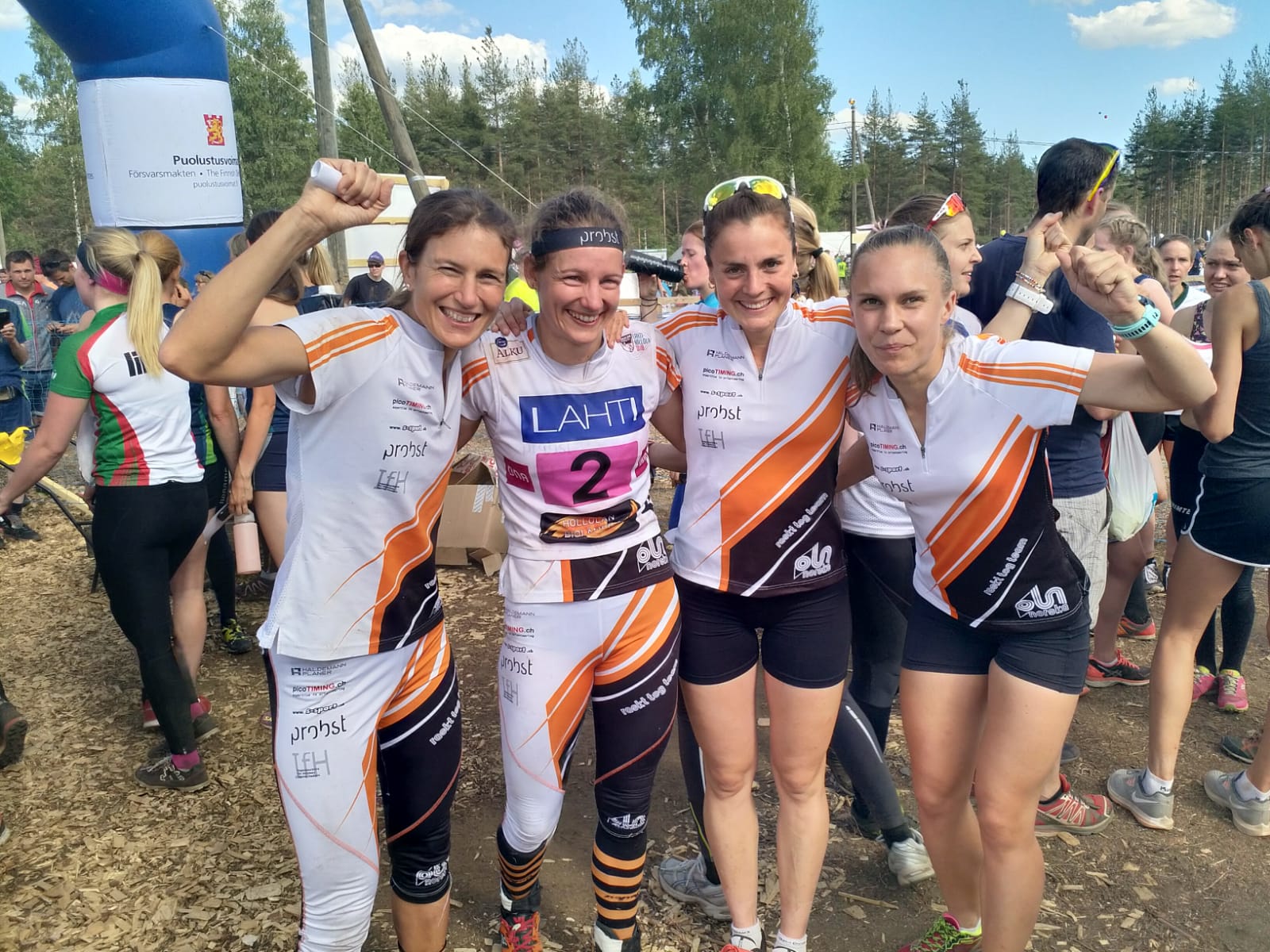 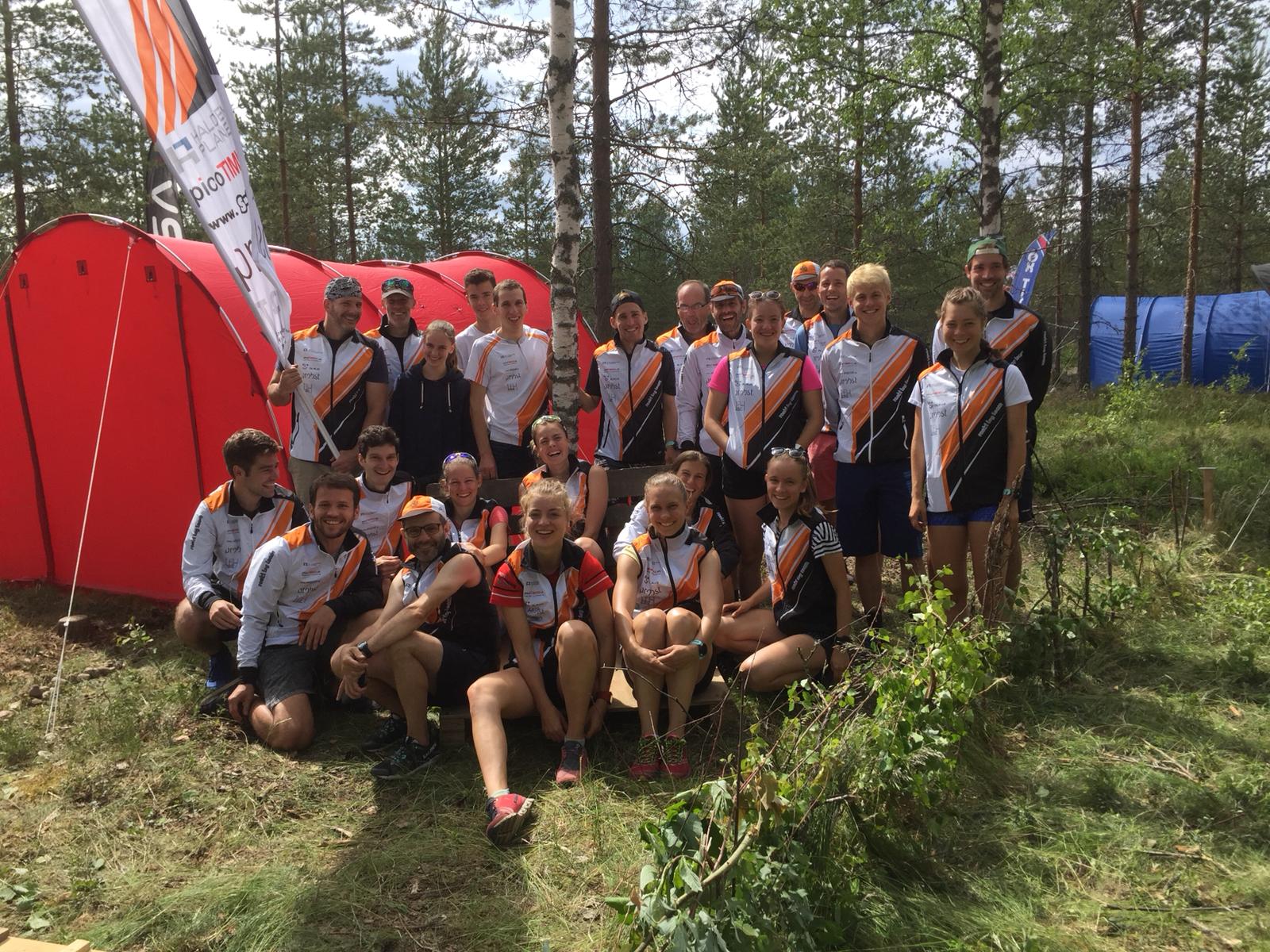 Our 2nd woman team fought well through the four legs as well, and ended on a good 105th position. Our men also did well through the night with the first team ending 52nd, and the second team as 343rd.