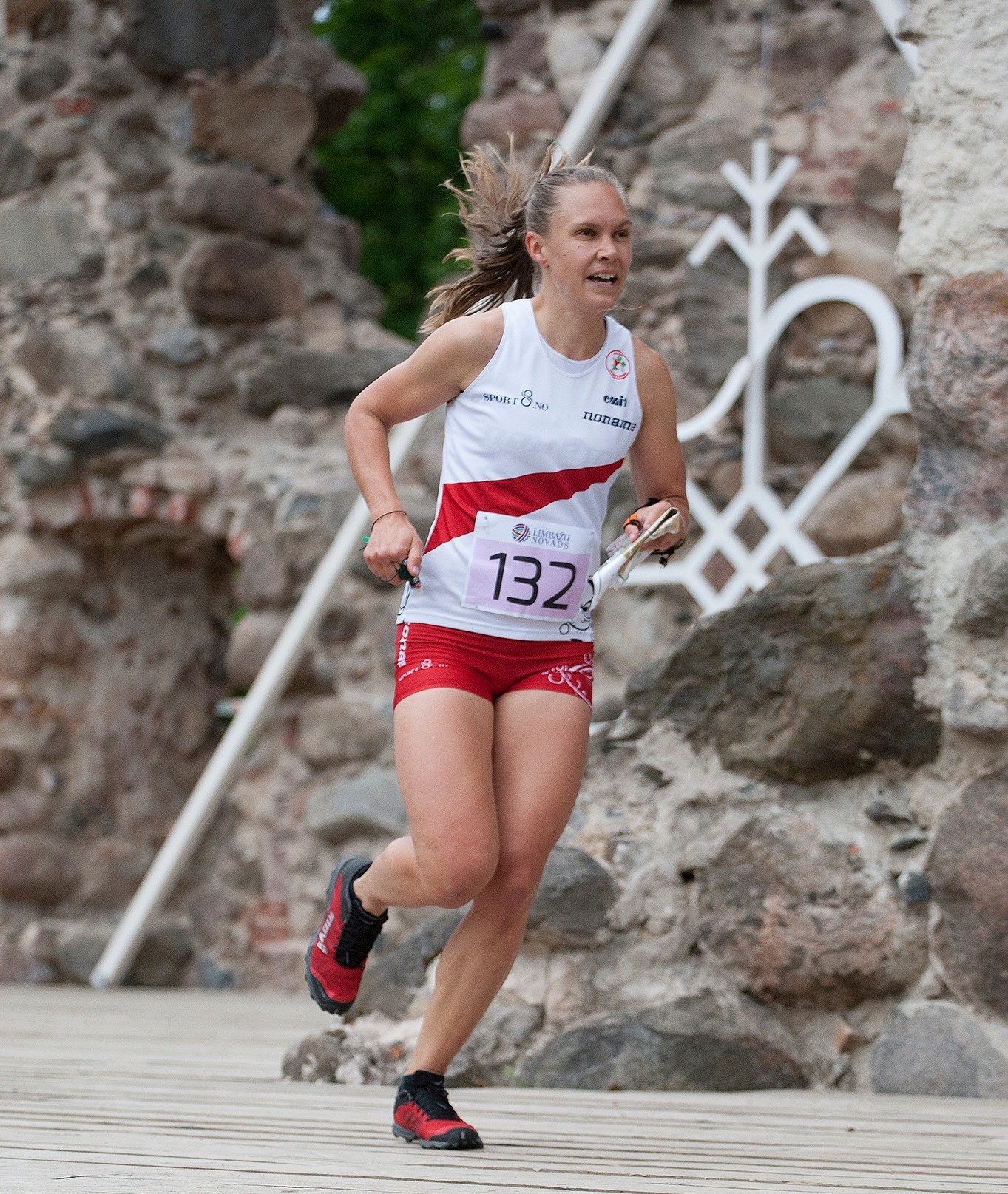 For the first time I have been selected to run a forest distance at the World Championships! With good performances in both the sprint and the middle distance at the selection races this weekend, I have  been selected to run both distances at WOC in Latvia in the beginning of August. The selection week started with a sprint on Wednesday last week which I won (<1 sec). Then the selection races continued with sprint, middle and long distance races from Friday to Sunday. I ended those races as 2nd in the sprint, 2nd in the middle, and 5th in the long distance.

The first selection race was an internal competition with only the norwegian runners on Wednesday in Cesis. I started out badly and after 3 controls I had lost more than 40 sec, because I almost forgot the 3rd control. After that I pulled myself together and pushed hard. I run quite cleanly technically, and in the end I managed to take the victory with a small second ahead of Ingjerd Myhre. Really not happy with my bad start of the race I had got the reminder that I needed - full focus from the start is needed to perform. In this race, all three girls running ended their race within 15 seconds. 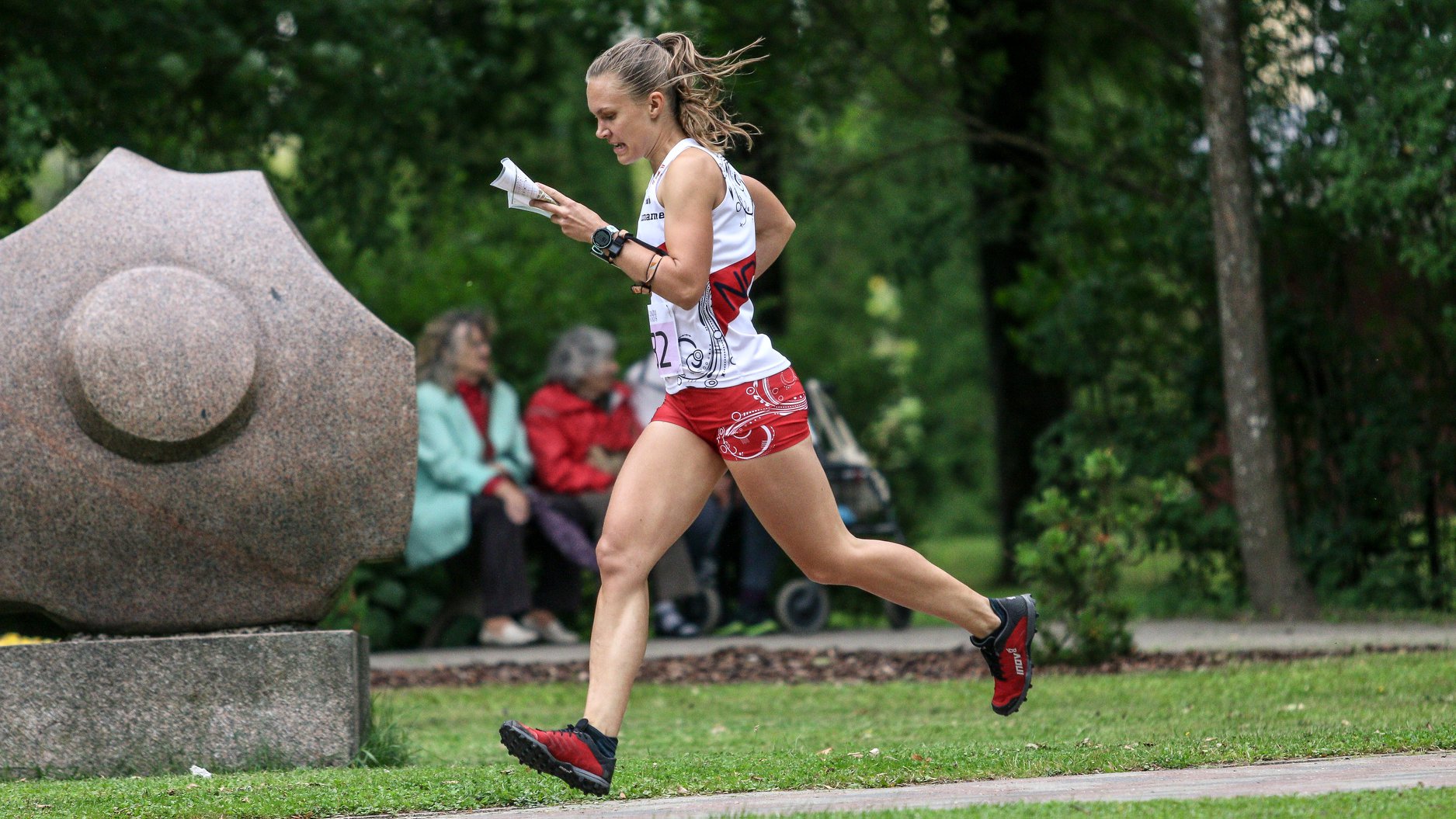 The selection races continued with the official selection races organized by the WOC organizers, and all of them had strong starting fields with the best runners of many different nations. The weekend started with Sprint in Limbazi, and I wanted to run a solid race with focus on the technical performance. I started a bit bad to the first control running abit around the olive green areas due to bad readability of where it was aloud to run, and at the control I first did not see it and hesitated. Lost a bit more than 5 seconds. Out of control 1 I was confused for some seconds before I had checked my compass and got away in the right direction. Out of the 2nd control I was too fast, and saw too late that my control had to be approached from the right, and that my routechoice therefore was the wrong one. Lost a bit more than 5s again. After this I ran well, until I did not see the opening into control 7 and again picked a too long route. Kept running good, but to control 10 again I picked to slower route eventhough it was the shorter. From there on I was a bit too careful on some easy legs in which I maybe could have pushed more, but I ran well technically. The last part had a lot of fences and many runners made mistakes. I was quite careful to read the whole leg, and avoided doing any mistakes. However, when running out the same way as I came in to control 16, I was not careful enough and ended up on the wrong side of a fence and had to run some meters back again, but lost only some small seconds. Towards the 17th I suddenly realized that I was almost in the finish, and from there on I tried to push as hard as I could. Finished as nr 8 in total and as 2nd norwegain, about 50 seconds behind the winner. 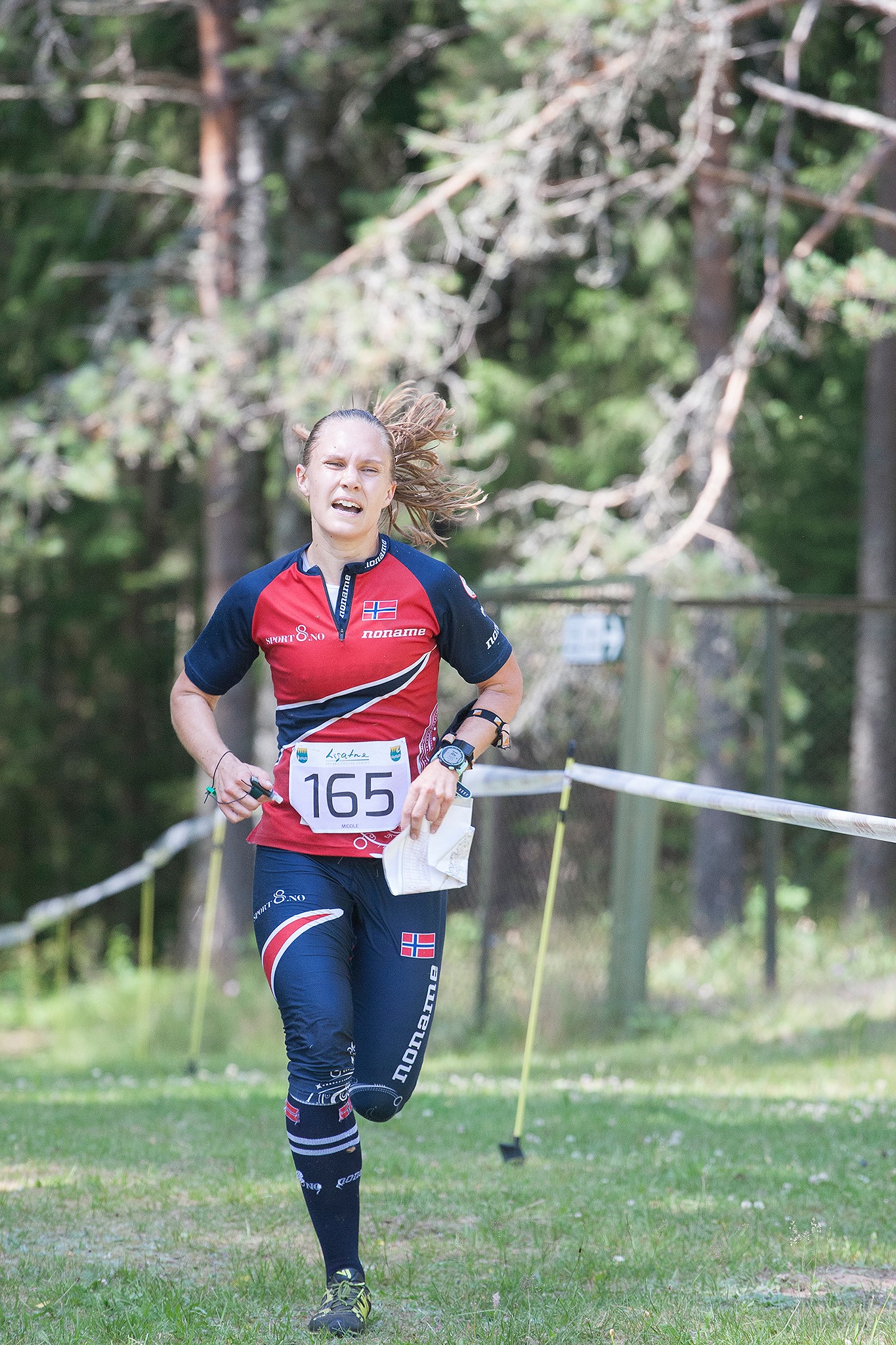 Saturday it was time for middle distance in Ligatne. I had a good plan, and was nervous, but excited to get started. I started out carefully and wanted to see the reentrance with the marsh down in the slope infront of me after passing the top of the hill. I saw it and could run just left of it down to my control. Good start, and towards the 2nd control I saw a lot of nice white forest quite straight, and could run quite fast without any risk. Looked fare ahead and spotted the detail way ahead. I kept running with a good plan, looking ahead and using my compass actively, and eventhough I got a little stuck into control 4, I ran very well until control 9. Towards control 10 I got a little unsure approaching the control, and started running further right, but stopped and realized I had to go left, and managed to mimize my mistake to only about 15-20 seconds. The leg to control 11 was my worst leg in this race. My plan was to go left down the marsh and follow the stream towards the control. But the runability stressed me, and I changed my plan and tried to run in the slope in stead. Here the runability was really bad, and again I changed down to the stream. On this leg I lost almost 1 minute on ziczacing in the green. After this I pulled myself together again, and ran safely to control 12. Towards control 13 I hesitated a lot and lost some time, without searching the control. Running towards the last control I tried to be careful with the compass, and at the same time push hard knowing that the road would stop me behind the control. But I stopped too early in the first path crossing. Realized quite fast, but 15 seconds lost. Finished as nr 4 in total and as 2nd norwegian only 1:33 min behind Marianne Andersen who won the whole race. Satisfied with my stable performance, even though the last part of the race could have been better.

The long distance became a tough day in the forest, with three races in the legs (2x sprint and 1x middle) I was tired. I started out well, and got the three first controls well. Into the 2nd I already saw the back of Sigrid Alexandersen who had started 3min ahead of me. But I did not catch her fully. On the long leg to control 4 I picked the wrong route (without knowing), and even got stuck in some green and lost a lot of time (about 2 minutes), and I started to feel tired. The 5th was good and I catched up with Sigrid again and I saw Andrine Benjaminsen coming from behind who started 3 min behind me. If it was my tiredness, or that I got disturbed by the two others or a combination of both I don't know, but anyway I managed to turn my map 90 degrees and run in the wrong direction. I realized first when I came to a big path crossing in which I had been before. Irritated on my own stupiedness I corrected my direction. At control 6 I saw the backs of the others again. Up between the houses the map was not correct and I ended up on the wrong side of a fence which were not mapped and had to turn. Thereby I lost the backs of Sigrid and Andrine. Into control 7 I made a mistake and came too fare in the slope. Again I lost almost 2 minutes. After this I ran well technically, but it was a fight physically. I picked up Andrine and Sigrid again in the forking, but lost them again when I had the longer forking in the end. The last part I was too tired, but at least I kept it together technically. I ended the race as nr 5 among the norwegians, and as 12th in total.

The selctions for WOC were already done in the evening on Sunday, and my two 2nd places in sprint and middle were enough to get both distances at WOC! Really looking forward to get my debute in an individual forest distance at WOC, as well as getting a new chance in sprint. Additonally, I am the reserve for the sprint relay. The World Championships will be held in Riga and Sigulda in Latvia in the beginning of August. 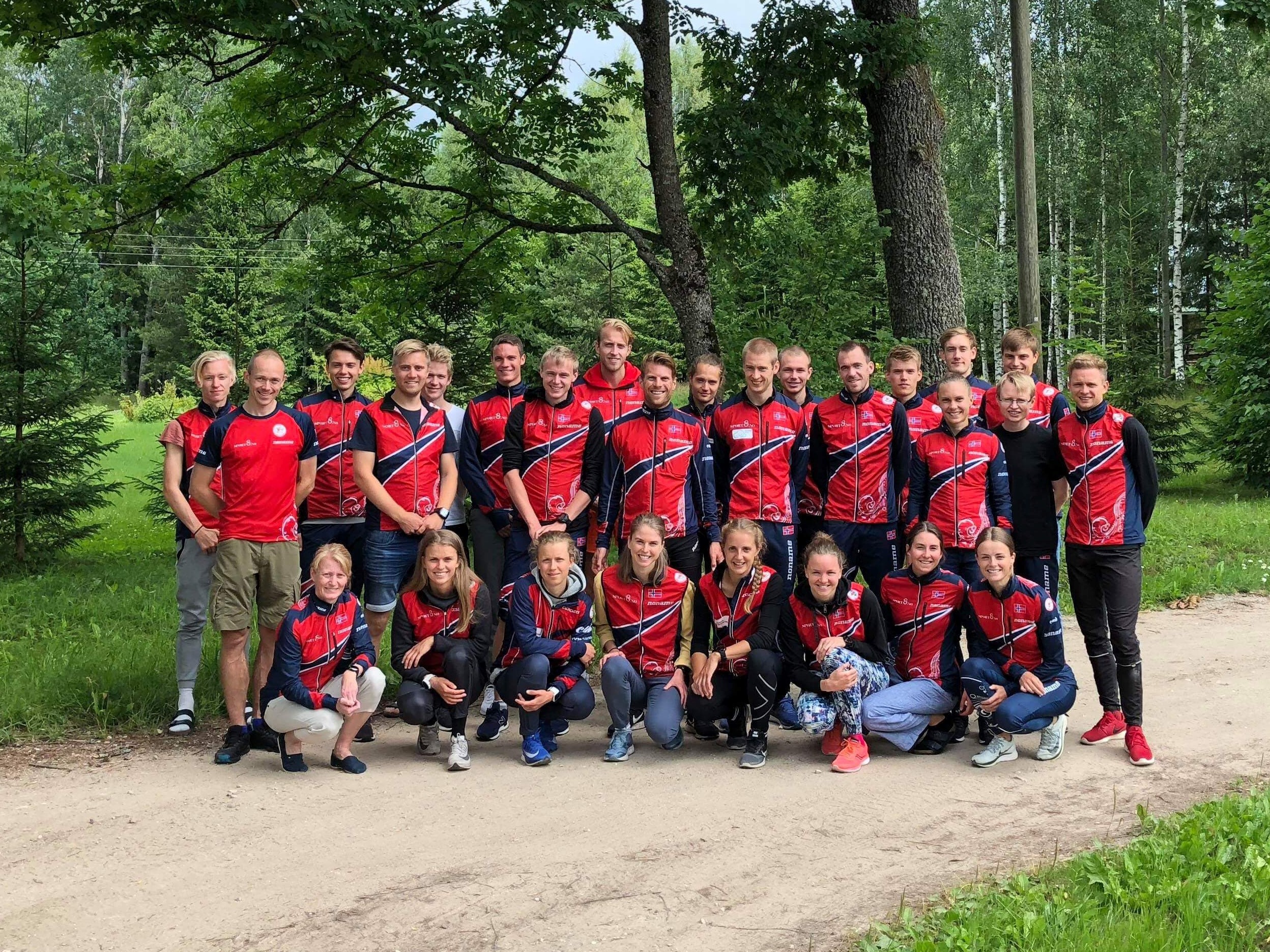