Gold and silver at Norwegian Champs 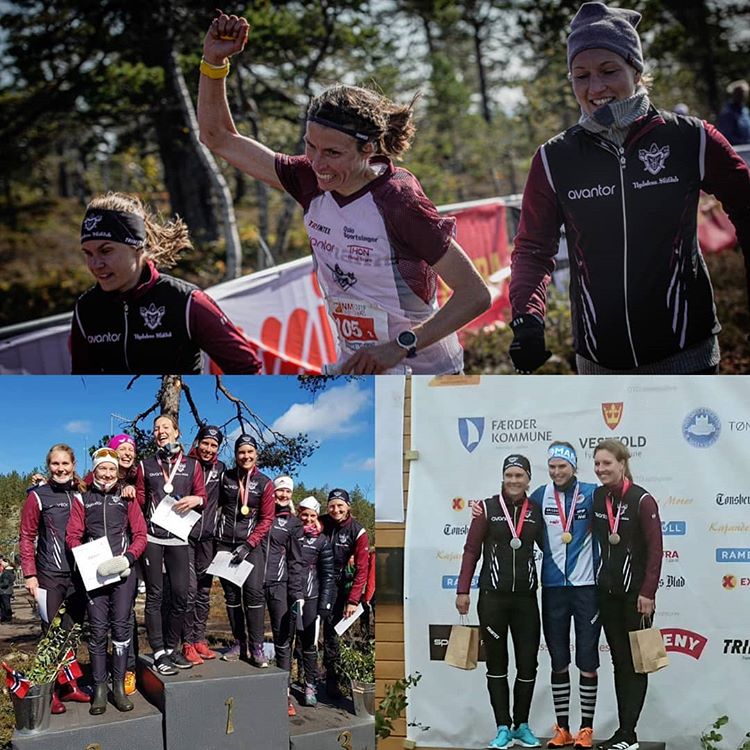 The norwegian championship at Skrim and Tjøme was a successful weekend for me: for the first time I won a medal (actually two) in the forest at the national championships. The "NM-uka" (norwegian champs week) did not start as well as I had wished for. I struggled physically, and also a bit technically in the first part, and ended 7th. The middle distance qualification went better, with a stable performance and 2nd spot in my qualification heat. In the middle distance my race was solid for the biggest parts of the race (minus one control on the last loop), and this time I had the seconds on my side and won silver! In the relay my strong team with Tone Bergerud Lye (1st leg), me (2nd leg) and Anne Margrethe Hausken Nordberg, won gold! So finally, after 11 seasons of aiming for the medals at "NM-uka", I could climb twice up on the podium.

The long distance was held at Skrimfjellet in beautiful, but very tough terrain. High undergrowth and wet marshes made it physically hard to run. The start of the race was down a slope with almost no distinct objects, and it was hard to understand the differences between white forest, open forest and marshes. I hesitated a lot down here, not understanding how my control could stand in a total open area (white on the map), and lost some 50s here. On the long leg to the 2nd control, I again misinterpreted the open areas vs the white areas in the terrain/on the map, and made a parallel mistake throwing me much further down the slope than wanted and it also made me hesitate for a long periode. Lost more than 2min here. From here on my race was better, but I was already tired after this 2 first controls, and the rest became hard. I kept it ok together technically most of the way, and could finish 7th. But did not have the speed for the top positions today anyway.

The terrain at Tjøme was totally different from Skrimfjellet, and it we became tricky and nice middle distance courses in both the qualification and the finale. In the qualification we got thrown straight into a tricky area, and except some minor hesitations and small corners I came through with a solid performance and ended 2nd in my heat. In the finale, I felt that I was more nervous. I started out a bit shaky with and ran one hill to fare into the control, but realized it and lost only minimally. 2nd controll was good, but the 3rd I did not see when passing it and had to run back up and lost a bit. To the 4th it could have been a big mistake: I misread the map and thought a fence was a path and I chose my routechoice based on that. I realzied after 100m, and ran straight instead. Lost a little bit, but at least I managed to minimize it again. After this I ran well until the arena, and here I was leading with 3s ahead of my teammate Tone Bergerud Lye. I continued well, but out of the 16th control I saw several cliffs which I would have to pass if I chose to go straight and went around to the left. Bad and too fast decision: there was actually only 2 cliffs, and the rest was bigger paths, and I had not read my routechoice fully through and my route became very long. Lost 1minute here, and after being in a secure 2nd spot I invited several other athletes into the fight again. I finished strong, and had to wait for the last starting runners, but in the end I had the seconds on my side: 5s ahead of Tone Bergerud Lye who took the bronze medal and 7s ahead of Anne Margrehte Hausken Nordberg. Andrine Benjaminsen won.

For the relay we were back at Skrimfjellet, and Tone ran the first leg in my team. She did a stable race and sent me out in 3rd spot in a big group. I started well towards the first controls, but had the longer forking to the 2nd control, and we were therefore a bigger group towards the 3rd and 4th control. To the 5th I made a big mistake not understanding the terrain into the control, and lost the others, but on the forking on control 7th I could close almost up again and at the arena passage I was 2nd, 45s behind Maren Haverstad from Nydalens SK 2nd team. I ran well the last loop and came closer to Maren. I sent out Anne Margrethe on the last leg in 2nd spot. Anne Margrethe did a strong race and ran away from the others, and secured the gold medal for us. Nydalens SK 2nd team with Anna Ulvensøen ran very strong fighting for the silver and bronze medal all the way, and ended 4th. Even our 3rd team came top 6, and with the mens team also winning gold, the club performance was impressive!

Very happy to finally take an individual forest medal and a relay medal this year. It has been on my goal-list for 11 years:) Next up is a new national weekend with sprint, norwegian champs in knock-out sprint and a masstart to finish the national cup. After that I will head to Switzerland for the next WorldCup round.